If you're a fan of Diners, Drive-ins and Dives you may have seen Guy visit Potterville, Michigan. A small town on I-69, west of Detroit. Having seen the episode ourselves, Mrs. Sippi and I decided that a stop on our Christmas road trip was in order. 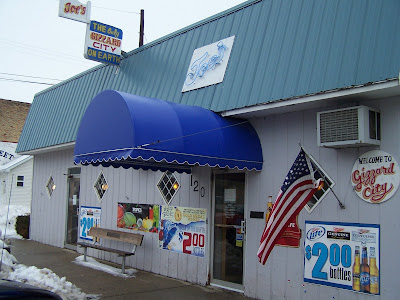 From the outside it's pretty unassuming which is pretty much what we expected. For me, stepping inside was rather a different story. Here in TO you can't smoke unless you're in your own house, in the basement with a blanket over your head. At least, that's how it seems. It appears the good folks of Michigan have more liberal ideas because you could smoke anywhere in the bar. No exceptions.
The decor it's self was pretty simple and half full of locals. All of whom were very friendly.

But on with the food.
We started with Homemade Onion Rings since it is a closely guarded secret recipe. I'm a big fan of the beer battered rings and these delivered. 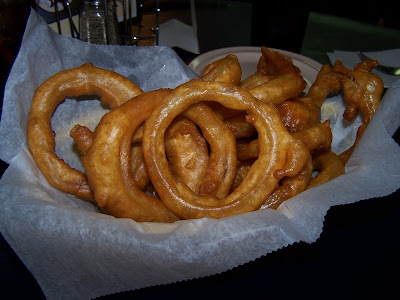 Since it's a "Gizzard City" and since Mrs. Sippi loves gizzards, she went with the Naked Fried Gizzards. A full order is the entire plate. It was huge. She could only manage half the plate with all the other goodies. As for how good they were. Awesome!! I've had gizzards before but they had the grinder still attached and the texture was a bit off putting. With the grinder removed, it was a nice meaty, tasty morsel. The leftovers became dinner later that night in our hotel room. We skipped the dipping cocktail sauce. 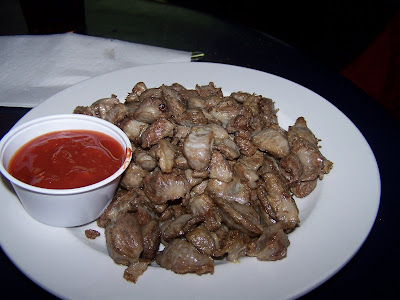 I, myself had the Triple D Burger. Again, fantastic. Battered and fried in their house batter, it's a cheeseburger with pickle, onion and tomato. The batter seals in all the juice and makes it a very moist burger. The actual burger it's self tasted great and next time I'm gonna go for a regular cheese burger.
The potato wedges they served with it were as well a stand out. 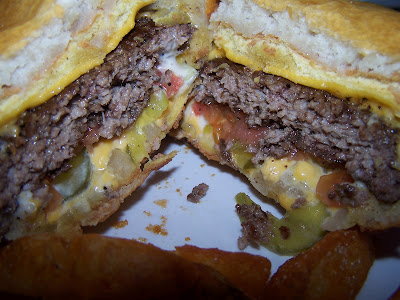 We also had an order of the deep fried (and battered) olives. They were only okay. I didn't find the batter added anything. 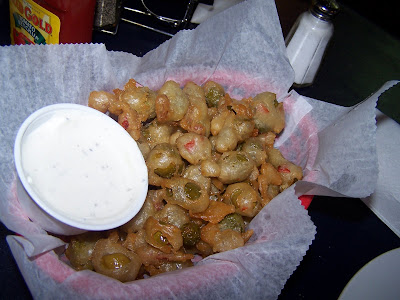 For desert we had the Deep Fried Nutter Butters. Also outstanding. The batteries ran out on my camera so we didn't get a picture.

So all in all, the stop was well worth it and we look forward to a return trip.

You can visit Joe on the web or in Potterville at 120 W. Main St.