These are the main ingredients at Puckett's Grocery, or so says their website. They don't however give you an idea of what an eclectic mix Puckett's really offers. While it may seem like a crisis of identity, it's one part general store, one part country kitchen, one part bar and grill. It has miss matched tables and chairs and a miss matched clientele. While all this diversity seems a bit much there is one unifying theme that ties it all together. Great food. 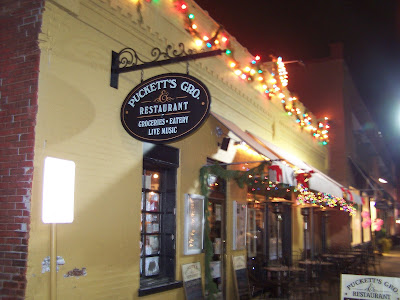 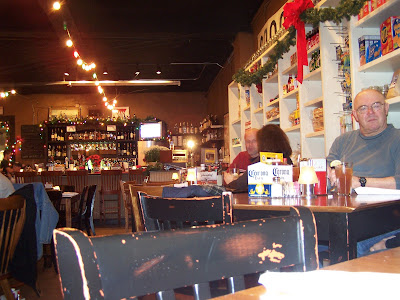 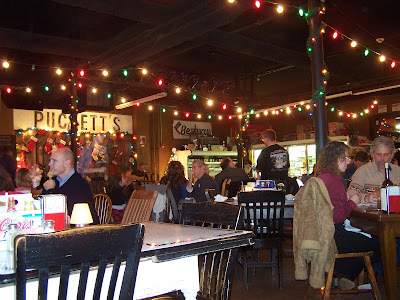 Having left Dayton, Ohio in a snow storm 7 hours earlier a good home cooked meal was in order. Unfortunately it was past dinner time and what we would call home for the next week was still 2 hours away. Puckett's would be the perfect substitute. This choice was made even better upon arrival when I noticed the specials board advertising Mac & Cheese as the "Vegetable of the day." My doctor did say I need to eat more veggies. 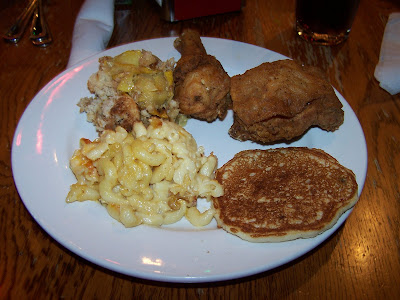 The mac and cheese was fine. It wasn't the best I'd had but it was a solid side to the fantastic chicken. Lightly seasoned and breaded, the chicken was dribble down your chin juicy. Tender and crispy it is served up golden brown and delicious. 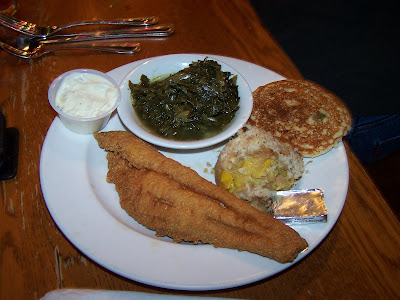 Mrs. Sippi's catfish was also outstanding. The fish its self was milder than the catfish I'm used to in Toronto. This perhaps because it would seem to be a younger fish (it was a smaller fillet) than we get in TO. It too was lightly breaded and crispy, golden brown and delicious. Her greens were also very good with the requite few shots of pepper sauce.

The corn cake or "Johnny cake" as it is sometimes known is a cornbread batter ladled onto a skillet and cooked like a pancake. The first bite revealed a nice surprise. It was studded with chile peppers and tasted great. Especially with a healthy slathering of butter.

Now, I'm not a big squash fan. I've had it in many incarnations with only a good butternut squash soup as something I'd seek out. However the squash casserole is worth the drive from Dayton. I don't know what magic they work in the kitchen on this dish but it is purely, simply, unbelievably delicious.


As if all that wasn't enough, the desert of the day was buttermilk chess pie. "What is chess pie" you may ask much like I did. Well, it's a custard like pie. It's uncertain where the name comes from but some people feel that it came from the pie chest that people had "Back in the day." Others will say that the evolved from the cheese pie in England. The best answer it seems is it's a result of what can only be described as a game of broken telephone. What started out as "Just pie" as in, "What's for desert?" "Just pie" has morphed over the years to "Jus' pie", "Jess pie" and on to become "Chess pie." One thing for certain, it has nothing to do with the game of chess. 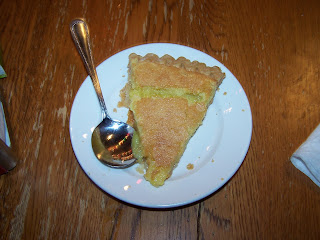 This became one of those "Oh my god, how have I never had this before moments." It was caramel-ly, vanilla-y and very sweet. Much like a custard but somehow just slightly cakey. The crust reminded me very much of short bread.

On a more recent trip I decided the shrimp and grits were just too good to pass up. Grits for those who don't know are basically the southern version of polenta. It's just cornmeal. "No self respecting southerner makes instant grits" was the line in My Cousin Vinny and rest assured these weren't instant. They had a great corn taste that would suggest they were probably stone ground. The sauce and shrimp was a perfect counter. Rich, spicy (but not hot) and full of shimp flavour. 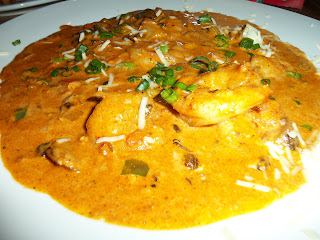 This time I went with chocolate chess pie which was every bit as good as it's regular sibling. 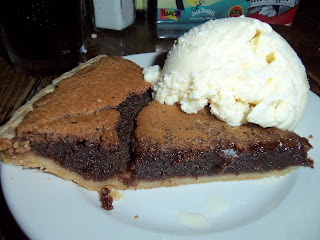 I've had a few of their cobblers in the past and Mrs. Sippi's peach version is just about as good as any of them. It's one of those "You can't go wrong ordering it" deserts. 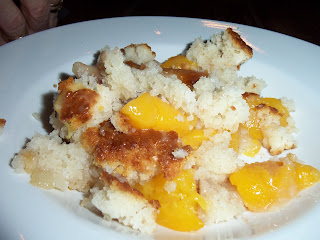 For you Civil War buffs, the Battle of Franklin was fought in and around the town. The near by Carter house still has shot and cannon fire marks on the exterior and not far away is the beautiful Carnton Plantation and the largest private Confederate cemetery.

You can visit Puckett's at 120 Fourth Avenue South, Franklin, TN.

Well that's all from the food court for today. Y'all come back now ya hear!!