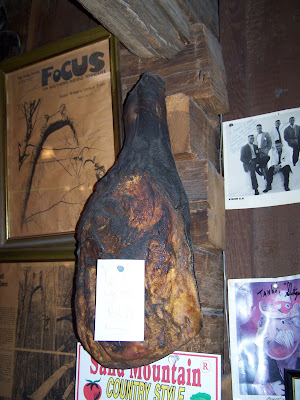 The sign says so!! Actually, I once asked if the ham was as old as they claim and was told that it indeed was. The magic of salt curing.
Although they say it's safe to eat, don't worry if you order the country ham at Stan's Restaurant and Country Store in Columbia, Tn. it won't be that old. 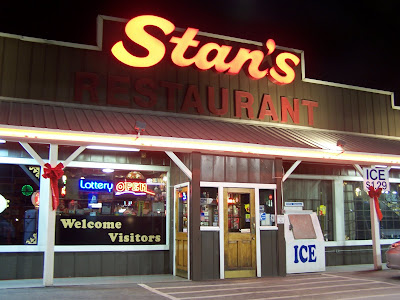 Located just off exit 46 west on I-65 about a half hour south of Nashville is Stan's. One part Citgo station, one part country store and one part restaurant. If the "Restaurant and Country Store" motif seems familiar then you've been to Cracker Barrel. As I once read in a review "Cracker Barrel don't have a lick on this place" and it's true. About all the two places have in common is they both sell food and trinkets. While the menus may look the same, don't kid yourself, Stan's outshines in every way in the kitchen.
I’ve been trying for the last few years to confirm this but Dan Evins who founded Cracker Barrel may very well have modeled the chain after Stan’s. He modeled CB on a restaurant he knew from when he was a boy. There are a lot of similarities to with which to support such a rumour but as yet, I can’t substantiate this. 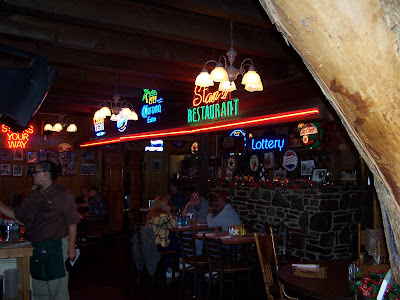 Although I've had breakfast and lunch in the past today's visit was for dinner. Even with frogs legs on the specials board both Mrs. Sippi and I opted for the chicken fried steak. As with Cracker Barrel (and many of the great Southern joints) it's a Meat 'n' 3 format. For the uninitiated, it's your choice of entree and 3 sides. I opted for mashed potatoes, (collard) greens and black eyed peas (note the nice chunk of country ham in the peas). Mrs. Sippi opted for white beans, fried okra and greens. Your entree also comes with dinner roll or cornbread. I chose the dinner roll and she chose the "Cracklin'" cornbread. 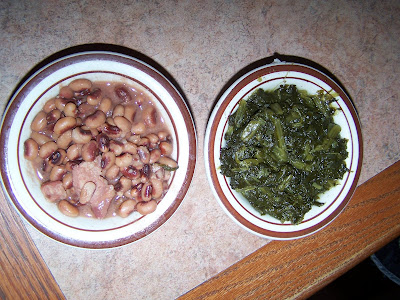 The greens and peas were absolutely fantastic. Very typical Southern style which is to say, cooked to death. It works though, trust me. Mrs. Sippi said that the white beans reminded her of the ones her grandmother made when she was a kid. So much so, she got the recipe and brought back 8 pounds of dried beans so she could make them at home. Other sides include mac and cheese, spiced apples and kernel corn.
The dinner roll was just that, a dinner roll. I got it simply to use as a sponge to soak up all the "Pot licker" from my greens. So all in all, it was perfect.
The corn bread was very good too with it's crunchy, porky goodness. 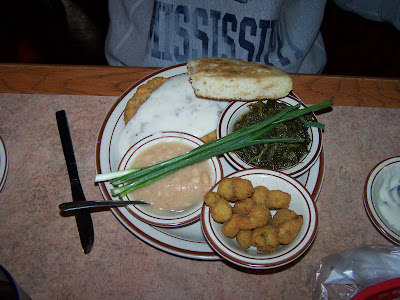 I do love mashed potatoes but less so when they're whipped. Some will tell you that you have to get the lumps out of your potatoes. Not me, I like them with some nice chunks of potato left in them so these were perfect. The only draw back is they don't come with gravy so I always ask for some extra on the side. The best part is, they give you sausage gravy so you get these little chunks of country sausage as well. 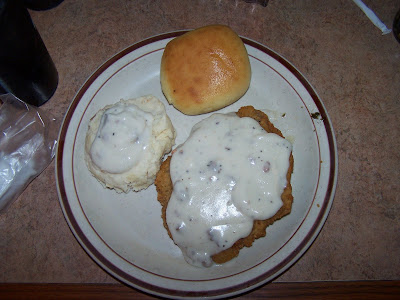 The steak was quite simply the best I'd had. We both agreed that it was better than the last time we had it. It's even better than the ones I've made at home. A nice ladle of the gravy over top of the steak makes it perfect. The sausage isn't enough to obscure the taste of the steak but give it a nice meaty, creamy compliment.

If you’re like me and like a big breakfast the Hillbilly Breakfast is a feast. Two “aigs” with grits, home made biscuits, hash browns, red eye gravy and of course country ham. The grits are pretty much just basic but that’s simply so they can marry with anything. The hash browns (not shown) are also good and basic. Both work well with the red eye gravy. Red eye gravy, believe it or not is made from coffee. The pan that ham is fried up in gets deglazed with the coffee. When I make it at home I simmer the ham in the liquid for a bit as well as a hunk of onion. It’s got a unique taste but the boldness really stands up well against the saltiness of the ham. After it’s all gone the leftover goodness on your plate can be sopped up with the biscuits. As for the ham, well, it’s just fabulous. Made by Harpers in Clinton Kentucky it really is, as their saying goes, “Hamtastic.” 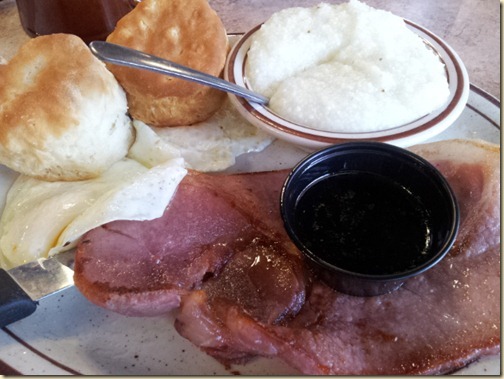 So next time you're south of Nashville and hungry for some good down home country cookin', take exit 46 and ignore the Cracker Barrel just down the street. Stop off at the Citgo station and visit Stan's. A true gem along one of America's busier interstates.
There's plenty of parking in the back for those in trucks or large RV and trailers.

That's all for now folks. The food court is now closed.