The Most Famous Buns in the Midwest

In June of 1972 Burt Reynolds was in Toledo, Ohio playing the "Rainmaker" when he received an invitation to dine at a local legend, Tony Packo's Cafe. "He's gotta eat somewhere" thought Nancy, daughter or Tony Sr.
After dinner Nancy, wanted to commemorate the visit. A tradition of signing buns at Tony Packo's was born when Burt decided to put pen to bread.
Since that day, scores of hot dog eating celebrities have signed buns that can be seen adorning the walls in Tony Packo's Front Street Restaurant. 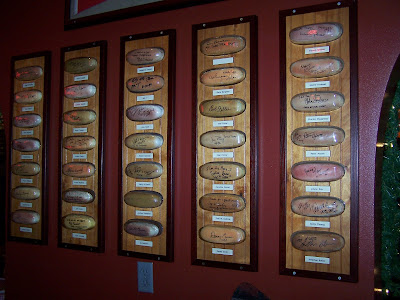 But that's not why Tony Packo's is famous.

In 1932 Tony, a factory worker and his wife cobbled together $100 and opened a restaurant severing the Hungarian population of Toledo. The new place was an instant hit serving authentic Hungarian food on a menu that included a unique invention of his. The Hungarian Hot Dog. 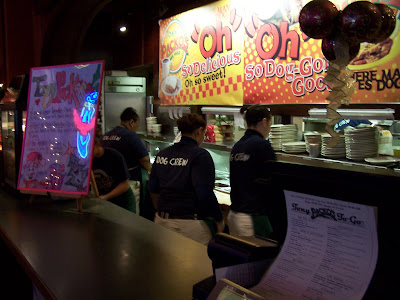 But that's not why Tony Packo's is famous.

Nope, Tony Packo's became famous on February 24, 1972 when Corporal Maxwell Klinger (Jamie Farr, a native Toledoan) uttered the words, "If you're ever in Toledo, Ohio, on the Hungarian side of town, Tony Packo's got the greatest Hungarian hot dogs. Thirty-five cents..." during an episode of the most popular show on television, M*A*S*H*. 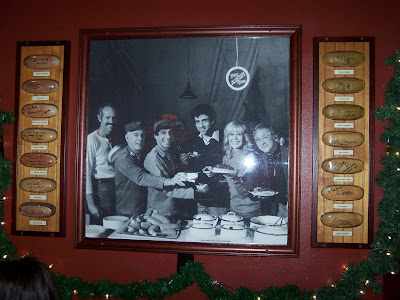 The early success meant that in 1935 the cafe moved to a wedged shapped building situated near the banks of the Maumee River in Toledo's Hungarian part of town. Renovations and expansions have occured over the years as well, the addition of merchandising and mail orders. Packo's now boasts 5 locations and can even be found in the local supermarket. 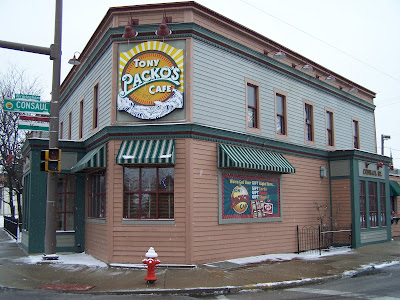 We started with the Chili on Chips. Round tortilla chips topped with onions, cheese, sour cream and Tony's "World famous chili." This was a nice little appetizer that tasted about how you would expect. It was good but did not WOW. 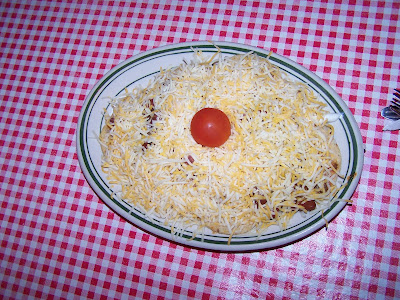 Mrs Sippi opted for the Chili Mac and Hot Dog combo which came with a creamy cucumber salad. The cucumber salad (seen in the picture with my chili) was okay. It mostly tasted of cucumber and not much else. There's a light dressing on it which seemed to be sour cream and vinegar.
The "Chili Mac" is that only by name. There's chili but no mac. Instead dumplings (Spaetzle) provide the carbs in this dish that's topped with cheese and garnished with pickles. While it was an interesting and somewhat enjoyable combination, I'd just as soon have macaroni instead. Mrs. Sippi agreed. The pickles were nice and slightly sour. 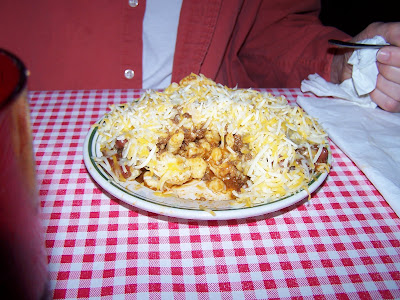 I had a feast. Litterally. The "Tony Packo's Feast." A hot dog, bowl of chili and cabbage roll. it came with a garnish of pickles and oyster crackers. 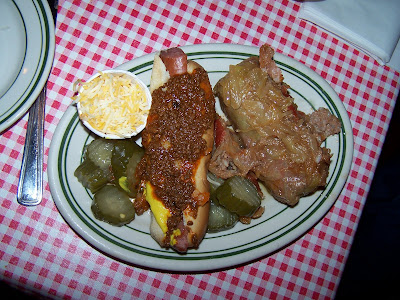 The cabbage roll is almost a meal in itself . What seemed like a half pound of meat and rice wrapped in cabbage and slow cooked. The filling was meat loaf like in taste and different from the Ukrainian style that I'm more familiar with. Very good though. 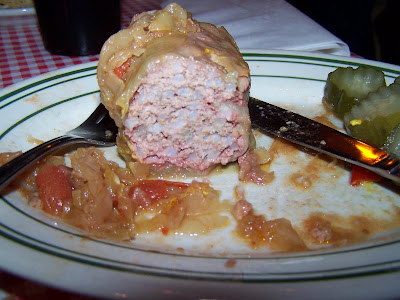 Tony's secret recipe chili is a somewhat soupy concoction of meat and beans with a strong cumin flavour and a hint of spice which I suspect comes from hot Hungarian paprika. I very much like it but could go even spicier. I thought about asking for hot sauce but didn't. 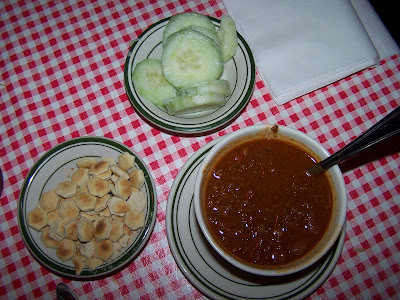 And now, the star of the show. The "Hungarian Hot Dog" is more a sausage along the lines of a keilbasa than a hot dog. Garlicky and not overly spicy, it's larger in diameter and is cut in half and grilled. It comes with "The works" which is onions, mustard and hot dog sauce on a soft bun. There's cheese to top it if you like. The hot dog sauce is pretty similar to the chili but has little broth and no beans. I always top with the cheese and devour. 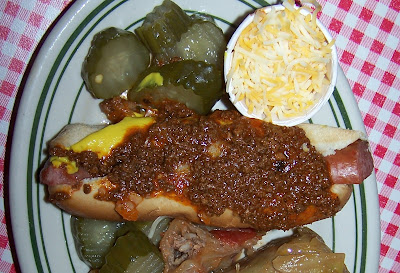 Across the street from the parking lot is a beautiful old, newly renovated church which the Packo family still attends. If you can, it's worth a visit.

So that's it from the food court for now. Check back once in a while for more updates.