I Hope There are no Tornadoes

We all know that mobile homes and tornadoes don't mix so lets hope that Chuck Wagon Diner can stay out of harms way. When I first heard of this place I knew I had to visit. The idea of a restaurant in a mobile home seemed hilarious to this northerner. Mobile homes being the brunt of many a joke from us folks north of the Mason/Dixon line and all. 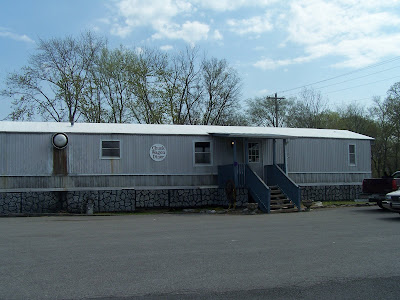 Opened in 1975, Chuck Wagon is two "Single Wides" angled together in a sort of "L" shape. 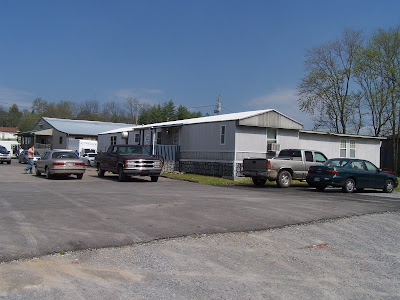 One housing the kitchen and front of house and the other making up the dining room. 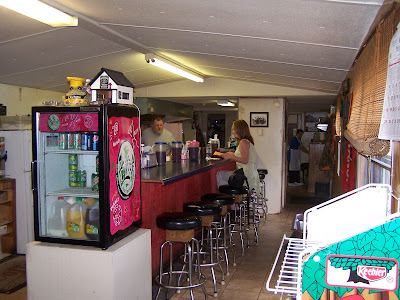 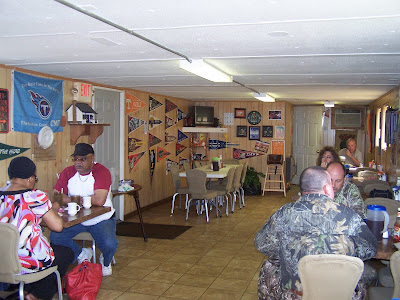 The interior decor was very much like someone's rec. room. Paneled walls adorned with awards, pictures and memorabilia. There were about a half dozen or so tables of varying sizes and every table had a pitcher of sweet tea on it. 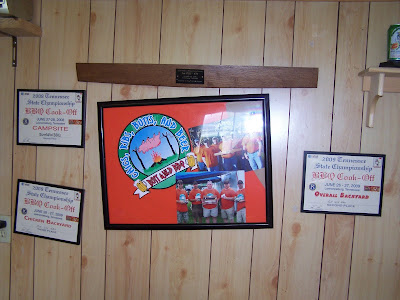 The place was half full of people when we walked in and it was just picking up for lunch as we left.
One of the greatest parts of being there is it was like being at a family reunion. People at one table talking and people at another interjecting comments. That being over heard by people at another table who offered their two cents. Everyone knew each other and talked throughout the whole dining room. It was a very interesting and cool experience. This place is as down home friendly as it gets. It didn't take long for us to be engaged in conversation.

As much as we enjoyed it, it seems we came at exactly the wrong time. Not that there is a bad time to visit. The thing is, we just missed breakfast. They're the 4 time reigning "Best Breakfast in Fayetteville" and their BBQ, served Thursday through Saturday is award winning. Perhaps the pinnacle being 2nd place ribs at the 2009 Jack Daniels Invitational. As prestigious a BBQ competition as there is.

So how was the food you may ask??

Well, we both opted for the hamburger steak. Essentially an over grown hamburger less the bun served with grilled onions and peppers. It came with sides of mashed potatoes, green beans and a slice of toast. I thought the toast was an odd thing but it turned out to be a perfect vehicle for cleaning up the plate. 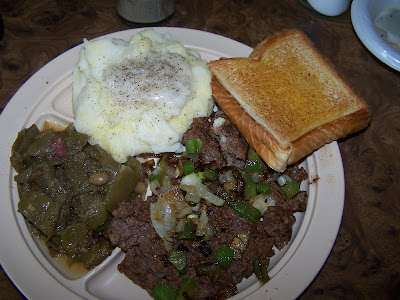 The "Steak" it's self was perfect and there were two things that made it that way. First of all, the ground beef they used was really good. Very beefy and tasty ground chuck. The second thing that made it great was they didn't mess with it. It tasted like a great hamburger. It came off the flat top and if you've been following along, you'll know I love the flat top. The grilled onions and peppers were just enough to make for a nice garnish. Not compete or dominate.
Mrs. Sippi thought next time she'd order cheese on hers. I liked it as is.

The mashed potatoes and green beans were out of this world good.
While I prefer my mashed potatoes to be mashed (which results in small bits of potato for a bit of chew) rather than whipped, the simple fact is taste trumps all. Creamy, buttery and smooth, they were great without anything on them. We liberated some gravy left over from breakfast which as it turns out, they didn't need.
The green beans were done text book southern style. Simmered to death with a hunk of smoked pig for seasoning. A good amount of salt, pork and smoke flavour beautifully seasons the beans. They're simply the best I've had. A nice amount of pot likker was left on the plate that was gladly sopped up by the toast. Just an added bonus.

I'm not a sweet tea person but Mrs. Sippi is. She put it this way, "You know that if they have pitchers of it on the tables, it's fantastic."

On a more recent trip I was able to sample the BBQ and let me tell you, it's every bit as good as the awards would suggest. It's absolutely some of the best BBQ I've ever had.

The little shack out behind the trailers houses the pits. 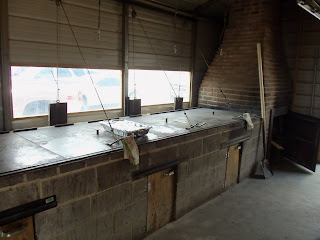 In this photo you'll see the pork butts for the next day. 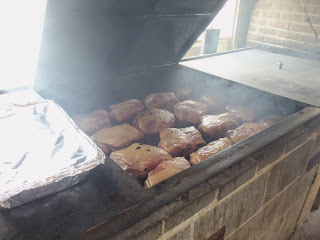 The ribs are incredible. Very simply seasoned (not much more than salt and pepper it seems) these are all about the smoke and meat. Very juicy and tender but not falling off the bone (just as they should be). They're served dry (meaning not sauced, not desiccated) and didn't need anything to help the flavour. 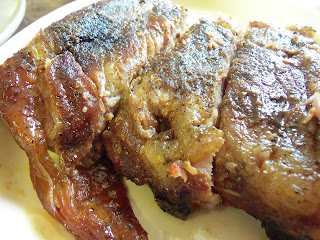 The chicken had a great smokey taste and was fall apart tender. The beans were quite nice. Not my favourite but very good. These are doctored up pork and beans and it goes to show how much better the stuff in the can can be with a little love. The potato salad was flat out incredible. Probably the best I've had that wasn't made by Mrs. Sippi. 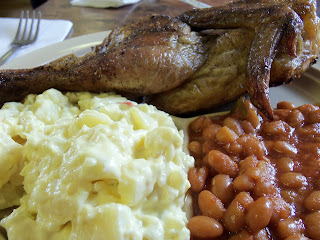 Even the sauces are made in house. The white sauce isn't as acidic as most and was very tasty. The regular sauce was of the vinegar variety found in BBQ to the east. The regular (right) was the perfect yin to the porky yang of the ribs. I was hesitant to use any sauce on them but this proved a great dance partner. I'm not big on hot BBQ sauce but this was fine (left). It actually worked well when mixed with the white sauce. 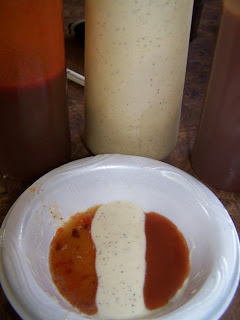 Y'all come back now ya hear.