Say "Hi" to the Colonel for Me.

For many people, Interstate75 serves as the main conduit from the north to Florida. This wasn’t always the case though. In by gone days, state highways would ferry people from one part of the country to the next. The advent of the Interstate system meant a lot of small towns were bypassed and business dried up

This was true of the Sanders family business in Corbin, Kentucky. A restaurant and motor hotel were thriving businesses on the Dixie Highway. Sanders, ever the entrepreneur was already working to franchise his chicken to restaurants. In 1955 when I - 75 opened, he sold his business to pay off debts and was broke. (Honourary) Colonel Sanders would hit the road, taking his secret recipe of 11 herbs and spices to the people. Selling restaurateurs what he called, “Kentucky Fried Chicken” became a full time job for him.
The original Sanders family business is long gone, replaced by replicas and a museum. If you’re on 75 in the southern part of Kentucky, take exit 29 and visit. See a mock-up of the kitchen where the recipe was born. Have your picture taken with the statue of the Colonel. Read the historic plaque.

Then get back in your car and head to the south end of town and eat at The Root Beer Stand. 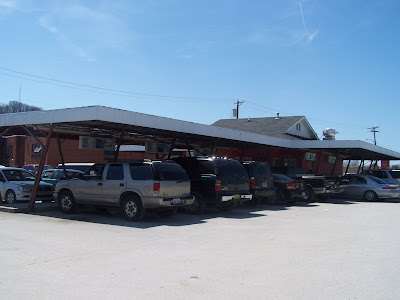 For decades The Root Beer Stand in Corbin has been serving up hot dogs, burgers, chuck wagons and the ubiquitous south eastern Kentucky chili bun. The later being a chili dog without the dog. They also make their own root beer. It wasn't as intense as what I'm used to. It did have a nice aftertaste that reminded me of molasses. You can purchase by the gallon to go.
The Root Beer Stand is a way of life in Corbin. So popular it doesn’t need a sign. People just know it’s the place. The non descript brown building that kinda looks like an Old A & W. It has plastic Pepsi menu boards all over the outside. It’s is a relic of a bygone era. Were it not for the gravel parking lot, waitresses on roller skates would not look out of place. Nor would Fonzie, Ritchie, Ralph and Potsy. A waitress comes to your car window and takes your order. She returns with a tray of food and hangs it on said window. 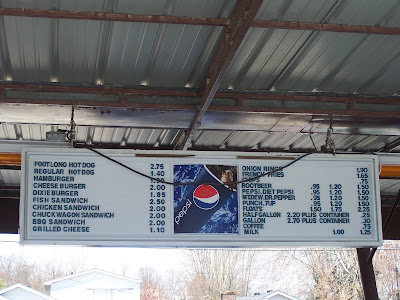 It’s also busy, really busy. Fortunately it’s a model of efficiency. We were there for a little over a half hour and there were probably 40 cars there. 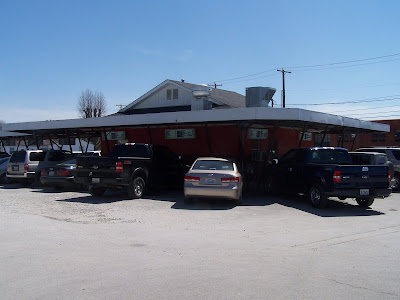 Most importantly, it’s a seasonal operation. Don’t show up in the middle of winter or you’ll go wanting. They run from roughly the middle of March to the middle of October.
And now, the food.
I had the Dixie Burger, a chili bun and a root beer float. We split fries. Mrs. Sippi had a foot long Coney. Like she didn't get enough Coney action yesterday. She had a Pepsi float.
The Dixie burger was really good. A home made 1/4lb burger with home made sauce that was sorta like bbq, onions and pickles. 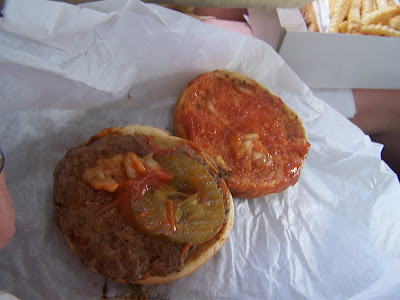 The chili bun was excellent and kinda neat. It's not quite a Sloppy Joe but it was similar and on a hot dog bun. It comes loaded with a finely ground beef chili that is rather thick. So much so that it maintained structural integrity during consumption. This too (Like American Coney Island) had no noticeable spice. It was pretty well balanced although it did have a slight garlic kick. I quite liked it. 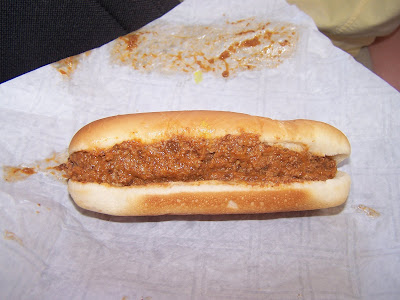 Mrs. Sippi's Coney dog was similar to ACI but not as good. Close, but not quite. It too was a Vienna style weiner loaded with chili. The crinkle cut fries were good but mostly because of the nostalgia. I rarely see crinkle cut fries anymore. 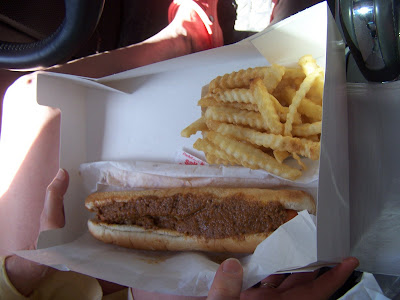 The floats were great. I can't tell you the last time I had a root beer float so it was such a nice change. I can imagine it would be a real treat to hang out with a float on a nice warm summer night. Especially if you had a convertible. 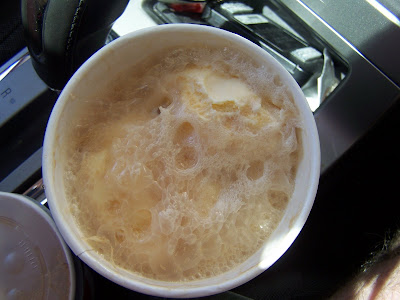 You can find The Root Beer Stand at 129 18th Street in Corbin Kentucky.

Well that's all for now. Hope to see you again.
Davwud